True Beauty Aesthetics Is a Physician Operated Facility Where All Injectables Are Performed by a Physician!

Botox is a commercial name for the botulinum toxin produced by a bacteria called Clostridium botulinum. Given this name, it should come as no surprise to learn that this is the same bacteria that causes botulism, which is a serious medical condition that comes with symptoms such as fatigue, weakness, problems seeing, and problems speaking. In fact, botulinum toxin is considered to be one of the most lethal toxins that can be found in the whole of existence. Botox in Rancho Cucamonga is highly demanded nowadays. Even Botox in Upland has gained the level of importance as in Rancho Cucamonga.

With that said, people need to remember that there are numerous toxins with useful functions in medicine, cosmetics, and other fields, with botulinum toxin being an excellent example. For proof, look no further than the fact that botulinum toxin sees use for treating muscle spasms as well as a number of serious medical conditions caused by hyperactive nerves. Furthermore, it is interesting to note that it has been approved by the FDA for use in treating chronic migraines while there are researchers looking into potential uses in treating other kinds of chronic pain. However, the best-known use for Botox is cosmetic in nature.

What Are the Benefits for Botox?

In brief, Botox can cause the facial muscles to relax, thus serving to smooth out the wrinkles in the skin stretched over them. As a result, while it is not a permanent solution for the problem of facial wrinkles, it is more than capable of providing somewhere between three to four months of smooth, flawless skin. With that said, Botox can be used again and again to prevent the return of facial wrinkles once the muscles recover their normal function meaning that it is not far from being the next best thing.

For those who are curious about the process of using botox to treat facial wrinkles, it is rather simple and straightforward in nature, though it should never be trusted to someone other than a reliable and reputable professional who can provide their expertise and experience in this regard. Regardless, the process starts with the Botox being diluted to an acceptable level in saline, which is a small amount of sodium chloride that has been mixed with water. After which, the resulting solution is injected into the tissue, which should not cause much pain both because the needle is small and because a topical anesthetic can be used to numb the region before the process is carried out. Once injected, the Botox should start showing results within 24 to 72 hours. However, it is interesting to note that there are rare cases when the results can take up to 5 days before showing themselves. 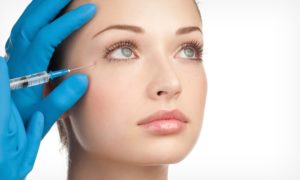 What Can People Expect From the Use of Botox?

For the most part, the use of Botox is considered to be safe with few side effects. Something that should come as welcome news to those who want smooth, flawless skin. However, few is not the same as none, meaning that interested individuals should learn more before making a final decision.

Regardless, the most serious side effects of Botox happen when it has been injected into something other than the intended tissue. This can produce serious problems such as the paralysis of unintended facial muscles, which can result in muscle weakness, problems chewing, and problems swallowing. Other potential side effects ranging from headaches to nausea and symptoms that resemble nothing so much as those for the flu. Moreover, bruising is possible but this is not because of the Botox but rather the method used to deliver the Botox to the intended tissues, meaning that skilled treatment can reduce the chances of this last side effect happening.